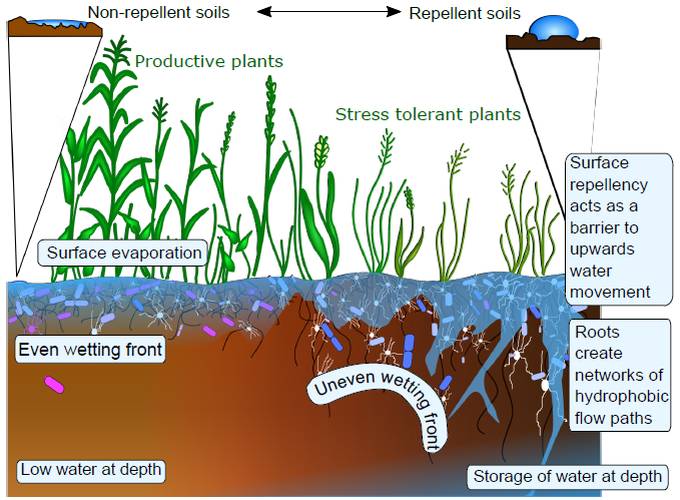 A warming climate and expected changes in average and extreme rainfall emphasise the importance of understanding how the land surface routes and stores surface water. The availability and movement of water within an ecosystem is a fundamental control on biological and geophysical activity, and influences many climatic feedbacks. A key phenomenon influencing water infiltration into the land surface is soil hydrophobicity, or water repellency. Despite repellency dictating the speed, volume and pattern of water infiltration, there is still major uncertainty over whether this critical hydrological process is biologically or physicochemically controlled. Here we show that soil water repellency is likely driven by changes in the plant and soil microbial communities in response to environmental stressors. We carried out a field survey in the summers of 2013 to 2016 in a variety of temperate habitats ranging across arable, grassland, forest and bog sites. We found that moderate to extreme repellency occurs in 68% of soils at a national scale in temperate ecosystems, with 92% showing some repellency. Taking a systems approach, we show that a wetter climate and low nutrient availability alter plant, bacterial and fungal community structure, which in turn are associated with increased soil water repellency across a large-scale gradient of soil, vegetation and land-use. The stress tolerance of the plant community and associated changes in soil microbial communities were more closely linked to changes in repellency than soil physicochemical properties. Our results indicate that there are consistent responses to diverse ecosystem stresses that will impact plant and microbial community composition, soil properties, and hydrological behaviour. We suggest that the ability of a biological community to induce such hydrological responses will influence the resilience of the whole ecosystem to environmental stress. This highlights the crucial role of above-belowground interactions in mediating climatic feedbacks and dictating ecosystem health.