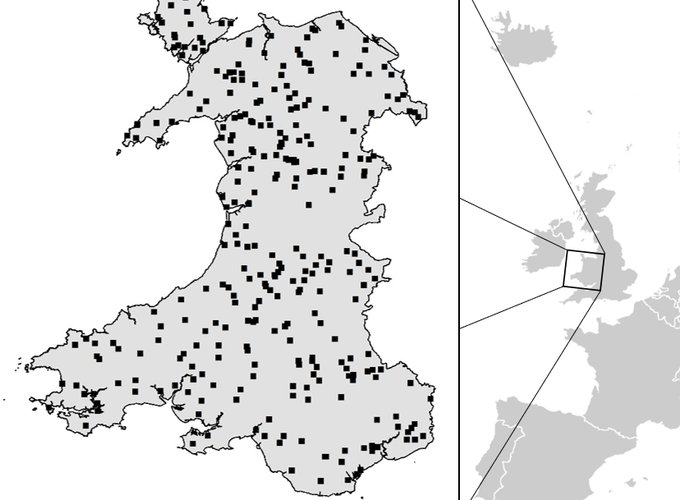 A major challenge in soil science is to monitor and understand the state and change of soils at a national scale, to inform decision making and policy. To address this, there is a need to identify key parameters for soil health and function, and determine how they relate to other parameters, including traditional soil surveys. Here we present a national-scale dataset of topsoil sampled as part of a wider agri-environment monitoring scheme in Wales, UK. Over 1,350 topsoils (0–15 cm) were sampled across a very wide range of habitats and a range of physical, chemical and biological soil quality indicators measured. We show consistent differences in soil physicochemical properties across habitat types, with carbon decreasing and pH increasing across the habitat productivity gradient from bogs through woodlands and grasslands to arable systems. The soils within our dataset are largely within the limits identified as important for supporting habitat function, with the exception of excessive phosphate levels in mesotrophic grassland. Cluster detection methods identified four soil functional classes based on measured topsoil properties, which were more related to habitat type than the genesis-based soil classification from soil maps. These soil functional classes can be interpreted as phenoforms within the soil genoforms found by traditional soil classification. This shows the importance of land-use management in determining the soil health and functional capacity of soils. Our work provides an account of the current state of soil health in Wales, its relationship to soil function and a baseline for future monitoring to track changes against agri-environment and other policy targets.